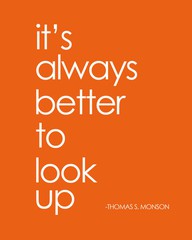 
He said: "At the end of a particularly tiring day toward the end of my first week as a General Authority, my briefcase was overloaded and my mind was preoccupied with the question “How can I possibly do this?” I left the office of the Seventy and entered the elevator of the Church Administration Building. As the elevator descended, my head was down and I stared blankly at the floor.
The door opened and someone entered, but I didn’t look up. As the door closed, I heard someone ask, “What are you looking at down there?” I recognized that voice—it was President Thomas S. Monson.
I quickly looked up and responded, “Oh, nothing.” (I’m sure that clever response inspired confidence in my abilities!)
But he had seen my subdued countenance and my heavy briefcase. He smiled and lovingly suggested, while pointing heavenward, “It is better to look up!” As we traveled down one more level, he cheerfully explained that he was on his way to the temple. When he bid me farewell, his parting glance spoke again to my heart, “Now, remember, it is better to look up.”
As we parted, the words of a scripture came to mind: “Believe in God; believe that he is … ; believe that he has all wisdom, and all power, both in heaven and in earth.”As I thought of Heavenly Father and Jesus Christ’s power, my heart found the comfort I had sought in vain from the floor of that descending elevator.
Since then I have pondered this experience and the role of prophets. I was burdened and my head was down. As the prophet spoke, I looked to him. He redirected my focus to look up to God, where I could be healed and strengthened through Christ’s Atonement. That is what prophets do for us. They lead us to God."   It is Better to Look Up
1 comment:
Email ThisBlogThis!Share to TwitterShare to FacebookShare to Pinterest
Labels: It is always better to Look Up. Look to God. Believe in Jesus Christ. Carl B. Cook. Burdens of Life. Thomas S. Monson on elevator.

Our greatest friend; God.  Our best way to reach him; Prayer.

Pray.  It can solve a world of problems.

He is there.  He listens.  He answers.  He really hears us.  He wants us to draw near to Him.  Then, He will draw near to us.

No comments:
Email ThisBlogThis!Share to TwitterShare to FacebookShare to Pinterest
Labels: Pray with all heart. Draw near unto God. Prayer can solve a world of problems. Greatest Friend God. Reach God through Sincere Prayer. He listens.

Things Will Work Out

Many of us loved the optimism of Gordon B. Hinckley.  He had a way of reassuring us that everything would be okay if we just kept the faith, endured in patience and faith, and lived true to what we knew.
His message that "Things Will Work Out" has helped many a person in trial or trouble.  It's been a blessing to me and - a little voice in the back of my head from time to time - which helped me know that 'everything will be okay."  Just Trust in the Lord!

No comments:
Email ThisBlogThis!Share to TwitterShare to FacebookShare to Pinterest
Labels: Trust in the Lord. Things will work out. Be believing. Gordon B. Hinckley. Optimism.
Newer Posts Older Posts Home
Subscribe to: Posts (Atom) 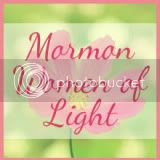